For those of you who aren’t familiar with this event, South By Southwest (SXSW) is an annual Film, Music, and Interactive festival that’s held in Austin, TX.  I’ve heard so much about this festival lately that I had to experience it for myself.  I decided I would make it a work vacation.  Milena wanted to come along, so I bought two passes to the Interactive festival and attempted to get a room at the Hilton across the street from the Austin Convention Center.  To my chagrin they would not offer me an employee rate.  As a matter of fact, I couldn’t secure an employee rate from any of the Hilton properties in downtown Austin.  Luckily, I have a couple of classmates from UNLV that live in Austin and work at a Marriott.  I contacted one of them through Facebook and explained my predicament.  He was able to immediately secure a Friends & Family rate through Marriott at the Renaissance Hotel.  It’s kind of funny & sad that I had to go outside the brand I work for to get a discounted room rate.

With the room out of the way, I purchased the passes for the Interactive festival.  They were pretty steep at $550 each.  I lucked out on the airfare, with two tickets through Southwest Airlines only running me around $200 each.

Milena and I were very excited to visit Austin.  It was our first trip there and second to Texas.  We attended Chris Brogan’s Inbound Marketing Summit in Dallas in May 2009.  We thoroughly enjoyed Dallas and expected to enjoy Austin as well.  I decided that we would spend half of our time at SXSW and the other half sightseeing.

The first day we were here, we picked up our badges and went to a party sponsored by Techset at Speakeasy.  The place was packed and everyone seemed to be having a good time.

Day Two, we spent half the day at the University of Texas Art Museum.  The museum has an impressive collection of European Art that was acquired through the Suida-Manning Estate in the late 90’s.  We spent three hours enjoying the art and walked the campus for a little while. 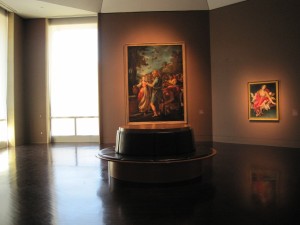 The second half of day two we spent walking the exhibits at SXSW and went to say hello to Chris Brogan at a book signing.  We only made it through two aisles at the exhibition hall.  The one thing that struck me was how bad people are at selling their product or service.  Nine out of ten exhibitor I spoke with at the show couldn’t explain to me what they were selling in a clear manner.  In some cases, I had to force them to tell me how much their product or service was being sold for.  They couldn’t close me out.  It was strange….very strange.  We’ll see what day three has in store.