Every year Star Trek fans from all over the planet converge for one week on the Las Vegas Hilton.  They are affectionately known as “Trekkies”.  To the outside world, it may seem a little odd, but within their community speaking in Klingon (tlhIngan Hol in Klingon) or having in-depth discussions about Episode V in Season 2 is as common place as a blue, pin-striped suit is on Wall Street.

I am not a Star Trek fan and couldn’t tell you any of the characters names in any movie or show besides Captain Kirk and Spock, but who couldn’t?  I must admit that over the past 5 years, I’ve been fascinated by this annual event and have contemplated going to the event just to see what it is all about.  It wasn’t until this year that I found the time to see it for myself.

It was prompted by a meetup (aka Tweetup) organized on Twitter by a few die hard Trekkies (@DVDGeeks, @Televixen, @Trekcast, @TrekMovie) and former cast members of the Star Trek the Experience.  It was held in our Space Quest Bar on 8/5/09, which is located in a space themed casino (Space Quest) in the Las Vegas Hilton.  The “Star Trek the Experience” attraction was adjacent to the Space Quest casino for 10 years before it closed in Sep 2008.  The annual ritual during the convention was to meet in the themed restaurant “Quarks” for food and drinks.  Since the attraction and restaurant are closed, they decided to have a party in the casino bar instead. 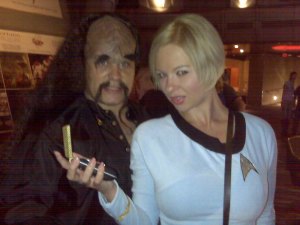 Televixen and jorDeKlingon at the Tweetup in Space Quest Bar.

I wasn’t sure what to expect, but I was pleasantly surprised to see that at 9 pm there were over 100 people already congregated at the Space Quest Bar.  The meetup was scheduled to start at 9 pm and people normally show up late, but not with this crowd.  It was everything I expected it to be and much more.  Several people were dressed up as Klingons and Vulcans.

Trekkies at the Space Quest Tweetup

Klingons were greeting each other in tlhIngan Hol, their native language.  The highlight of the party was a couple dressed up in Star Trek officer garb who traveled all the way from Japan to attend the convention, but the distance traveled was not the amazing part of this story.

Hand made model of Star Trek the Experience

What was amazing was that they brought with them a miniature replica of the Star Trek the Experience attraction which was handmade.  The detail was unbelievable.  I couldn’t imagine how many hours it took them to create and put it together.  I left around 11:30 pm while the Trekkies (by this time it grew to around 200) stayed and partied ’til the early morning hours.  I was impressed and decided that I would stop by the convention the following day.

Thursday, Aug 6th, was the 1st day of the convention.  I went to the convention with one of my colleagues to see what the day would bring.  After what I saw at the Tweetup the night before, I was anticipating an entertaining time.  I was not disappointed.  Outside of the main showroom, there were hundreds of fans lined up to get a picture with a former cast member in the Photo Ops area.  Many were dressed up as Vulcans, Klingons, Borgs, and other species I’m not familiar with.

The main part of the show is split into two rooms.  One room is lined with rows of vendors selling various merchandise, from Star Trek memorabilia to celebrity autographs.  As we were passing by one of the celebrity booths, I recognized actress Virginia Hey (Mad Max 2).  On Monday, she tweeted that she would be at the convention.  We had a brief conversation.  She is a very interesting person and is very approachable.

We moved on to check out the rest of the booths.  After browsing through various Sci-Fi movie memorabilia, I recognized another person I’ve seen on Twitter, PR Cole.  She is a nutritionist from New York who is also a Trekkie.  She was dressed up in full Star Trek attire with a friend of hers.  We chatted for a few minutes before we decided to go check out the other showroom, which had the guest speakers. 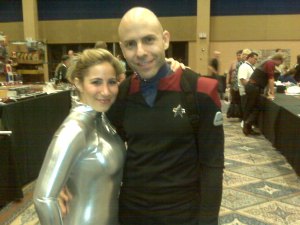 Cole and her friend

The guest speaker showroom had a large stage with video screens and featured a former cast member being interviewed by a host.  There were at least 1,000 people in the audience.  They were taking tons of pictures and were able to ask questions when called upon.  One guy waiting on the side of the stage to ask a question had an Starfleet Officer uniform that wasn’t authentic and the cast member called him out saying that the pins were in the wrong position.  I didn’t understand what was going on, but the audience was quick to get on this guys case and laughed at him.  The poor guy must have felt like crap.  Even his Trekkie buddies were making fun of him.  He didn’t seem to be affected, and asked his question anyway.

We had enough Star Trek for the day and went back to our office to get back to work.  If I have some spare time, I will return on Day 2 and give a brief recap.

Other Events & Articles on Day 1