I first heard about the Pinball Hall of Fame from Yelp! about a month ago.  When I heard that they had dozens of old pinball machines & old school video games, I knew I had to take my son there to check it out.  The hall of fame is located on East Tropicana in a nondescript, older shopping mall.  A small vinyl banner hangs above the entrance of the hall of fame, hardly what you would expect for a HOF! 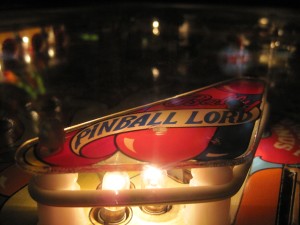 When I walked into the building, I was struck by how dark the place was.  It is a large single room with vaulted ceilings and not very well lit.  A combination of sunlight and light from the pinball machines and video games supplement the few lights on the ceiling.  It has an eerie feeling to it, more on this later.

The pinball machines are organized into rows and seem to be in date order with the oldest machines on the left side of the room.  There are some machines from the 1950’s and earlier.  The right side of the room is where the video games from the 1980’s are located.  Donkey Kong, Paperboy, Tempest, Space Invaders, and Spy Hunter are among the many that I remember playing as a child….these were one of the main reasons for coming down here.  Here’s the best thing about it…..they are only $.25 to play!  Actually, most of the pinball machines and games in the joint are less than $1, which is refreshing to see.

Along the outer edge of left side of the room are old games & machines that appear to be in the process of being restored.  It almost looks like an antique store or garage sale in that area….another creepy element to this place.

After a few laps around the room to orient myself, I was surprised that I couldn’t find a single employee.  Does anyone work here?  There are two change machines to convert your cash to coin, but I couldn’t find anyone who worked there.  Maybe the old machines and 80’s video games were getting to me, but this place was creeping me out and I was beginning to feel as if I was in the Twilight Zone and was looking in the corners to see if Rod Serling was watching us in his black suit, ha!

After making change, my son and I split up to play around a little bit.  There were some great pinball machines there, some that I haven’t seen in a very long time.  They are in great condition and not once did I have a tilt or lose my money in the coin slot.  As I was walking down the aisles I noticed a couple of very strange games.  One game featured a dancing puppet clown that for $.25 you can control the clown while a song played….now this really creeped me out.  Ever since I was a kid and first watched Poltergeist, I’ve hated toy clowns.  This one looked like it was going to jump out of the machine.  Another creepy looking game involved controlling a doll faced baseball player where you hit a ping pong ball, which was suppose to be a baseball over the fence for a score….seriously, I was convinced I was either the main character in a Creepshow story or I watched too many late night horror flicks in the 80’s.  Most likely it was the latter.

Other cool games were the old school Chexx hockey game with Russia vs USA (remember?) and an air hockey game.  We were there for over 2 hours and spent $20.  You can’t beat that!

I still never found an employee.  I will go back soon to investigate further.  I suggest you give it a try if you’re in Vegas.